“A day that I don’t smoke is like a year of life to me,” says Julie Crest, who works at the Don Haskins Recreation Center. “The Paso del Norte Health Foundation helped me save my life.”

Fifteen years after A Smoke-Free Paso del Norte was launched, Julie’s sentiment is echoed by thousands of former smokers who have found the strength and resources to quit, thanks to this signature initiative of the Paso del Norte Health Foundation.

But don’t think the work is done. Even with all the measurable success, there is still plenty to do in addressing the needs of individual smokers, the effects of second-hand smoke, and combating a tobacco industry that continues to find new ways to market its products to a youth population.

“The tobacco industry continues to develop new products to market to young people, and to lobby state and local governments against tobacco-free policies and laws,” says Jana Renner, PdNHF program officer. “As long as this is true, we will need to continue to deploy strategies that prevent youth from initiating smoking, help smokers quit, and protect non-smokers from second-hand smoke.”

The smoke-free initiative has achieved measurable results across the Borderplex region, including a reduction in adult smoking in El Paso County from 21.5 percent in 1996 to 13.6 percent in 2010. This history of success largely is due to the smoke-free initiative’s comprehensive and coordinated approach, which is recognized as a Centers for Disease Control and Prevention best-practice model.

The initiative’s elements include the promotion of strong indoor clean-air ordinances; tobacco use prevention and cessation media; the development, promotion, and availability of youth prevention and adult cessation services; the establishment and maintenance of a tobacco control network; and the implementation of an ongoing evaluation plan driven by regular surveillance.

The sustain the effort, the Health Foundation has invested a total of $14 million and awarded 123 grants to 31 different organizations over the past 15 years.

“We know it’s not a matter of priority but of building blocks, what works, what doesn’t, and how we build a healthy community by building healthy individuals,” says Annette Torres, another tobacco-free program coordinator at UTEP. “So in some manner, whether that be in education, prevention or cessation, the smoke-free initiative work will always be a part of the Foundation’s efforts.” 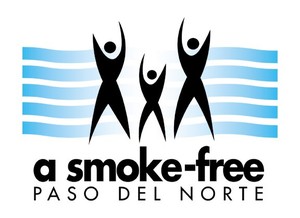