Joe Tomaka and his team at Crimson Research on the campus of New Mexico State University are learning from smokers as much as they are helping smokers kick the habit.

Tomaka is the principal investigator for a grant from the Paso del Norte Health Foundation that promotes a smoke-free southern New Mexico by reducing tobacco use among adults in Doña Ana, Otero and Luna counties. 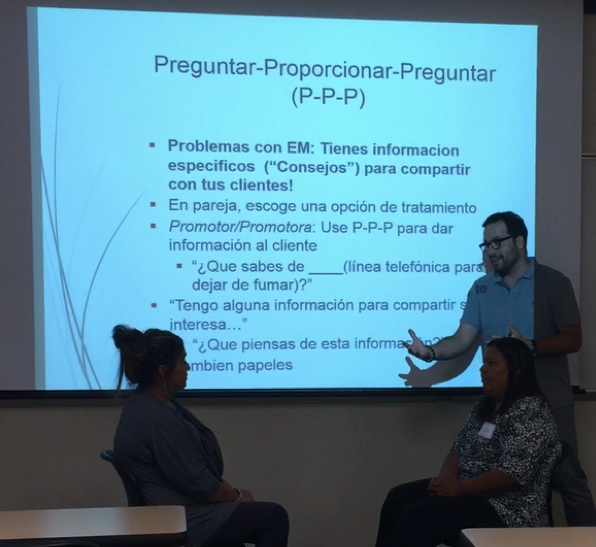 The Crimson Research team has engaged more than 1,000 people in smoking cessation strategies since work on the grant began a year ago, far exceeding its targeted goal of 300 people.

Now it wants to increase the number of smokers who commit to a specific plan and specific date to quit, and the team thinks it has a better handle on how to accomplish that.

“One of the biggest lessons is just how difficult it is to get people to quit,” Tomaka says of the work he and four colleagues are doing. “Many express a desire to quit, but then are not really ready to quit.”

The solution comes through engaging family and friends who can help influence a smoker. That effort will become a bigger part of the strategies in year two, as Crimson Research works to get 120 smokers to commit to a cessation plan.

As its work progresses Crimson Research realizes that “we may not be the ones who motivate the smoker to quit,” says team member Ernesto Moralez. “But maybe someone else – a sister, a mom – is the one who can get them to quit.”

Crimson Research, which is implementing the grant through the Southern Area Health Education Center, is relying on trained community health workers, or Promotores de Salud, to be the conduits who help smokers gain information to make the decision to quit.

Ana Luisa Gonzalez (cq) is the Crimson Research team member who has been recruiting promotores across southern New Mexico. She knows big tobacco targets lower income residents through marketing strategies, so she has focused her recruiting efforts on those neighborhoods across Doña Ana, Otero and Luna counties.

The promotores complete three days of training to learn the effects of tobacco, to hone motivational interviewing skills that persuade a smoker to quit, and to gain knowledge of the marketing strategies tobacco companies use and how to counter those messages.

Once training is completed, community action plans are then tailored to the specific areas that promotores are working in. It’s the neighborhood recruitment efforts of Ms. Gonzalez and the tailored action plans that Crimson Research believes are the reason the team has been able to engage more individuals in smoking cessation than originally planned.

So far, seven people have completed the Promotores de Salud training. Once in the field, Crimson Research then brings the promotores back for two follow-up sessions to refresh what they’ve previously learned and to keep other lessons front and center.

New Mexico has a smoking rate of 16.4 percent of the population, compared to 15.1 percent nationally. Hispanics in New Mexico also smoke at a higher rate than Hispanics nationally.

Those two statistical points give Crimson Research the motivation to increase its smoking-cessation efforts and get the commitments from smokers to quit.

“The takeaway so far is that it is important to not only engage smokers, but to motivate the family and friends of smokers who can use their influence,” says Tomaka. 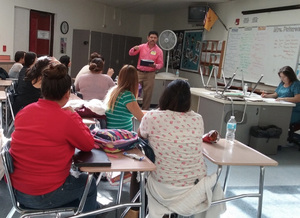