More than 400 guests joined the Paso del Norte Health Foundation board of directors to celebrate the anniversary of the Health Foundation, its accomplishments, and to hear about emerging projects for the future. Sally Hurt-Deitch, Market Chief Executive Officer of The Hospitals of Providence, welcomed attendees and emphasizd the importance of partnerships to create systemic change in the health of the region now and into the future. Dr. Abraham Verghese spoke on the importance of “care” and empathy for those serving in the health care professions. Dr. Verghese was a Professor of Medicine and Chief of the Division of Infectious Diseases at Texas Tech Health Sciences Center in El Paso. He practiced medicine at Thomason Hospital from 1991 to 2002.

The Health Foundation also celebrated the anniversary with past and current grantees to thank them for their hard work and dedication to promoting healthy behaviors. More than 150 grantees joined in the breakfast celebration, with guest speaker U.S. Congressman Beto O’Rourke. Congressman spoke about the role of leadership to create change for a better community and the need for improved behavioral health services for veterans in the El Paso area. 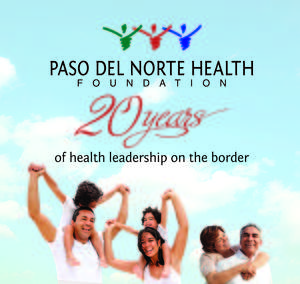