November wraps up the second year of the Paso del Norte Foundation’s Challenge Fund program. The PDNF started the Challenge Fund program in 2014 with a generous grant from the Paso del Norte Health Foundation to inspire new and increased gifts through a wide-range of sponsored events and appeals. In these first two years, the Challenge Fund program has inspired nearly $1.8 million in gifts from over 3,000 individuals, corporations and foundations as part of 36 different events and appeals raising and returning nearly $2.7 million to charitable organizations in El Paso, Ciudad. Juárez and southern New Mexico.

Research shows that challenges prove to be an effective way to maximize fundraising activities. In an article in the Journal of Economics entitled “Small matches and charitable giving”, the authors note that “simply announcing that a match is available considerably increases the revenue per solicitation – by 19%. In addition, match offer significantly increased the probability that an individual donates – by 22%.”

The PDNF Challenge Fund has proven to be a significant motivator among nonprofits in the Paso del Norte region. NAMI of El Paso raised $20,000 more for their walk this year than last year, helping this volunteer-led organization ensure people with mental illness have the resources they need. The El Paso Center for Children hosted their second annual tribute event honoring child-advocates Sharon Butterworth and Fred Morton. The El Paso Child Guidance Center raised more money than it ever has during its annual event roasting Emma Schwartz and Paul Foster over the last two years. The Center Against Sexual and Family Violence recognized the Junior League of El Paso during their “Round Up” event, which inspired a $35,000 major gift from Bank of America Merrill Lynch. Juárez-based organizations, La Rodadora and Centro de Asesoria para la Integracion y Promocion Juvenil were able to use the matching funds to inspire significant major gifts. Smaller organizations like the Segundo Barrio Futbol Club and El Paso Public Library Foundation learned the value of the matching program in inspiring volunteers to reach out to colleagues, family and friends.

To learn more, log-on to www.pasodelnortefoundation.org. 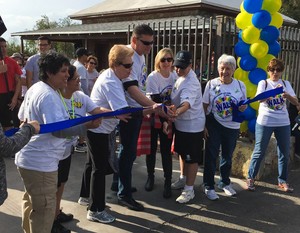