The Hitch-N-Post BBQ, meanwhile, has added four entrees that meet the nutritionist recommendations and two healthy side dishes. It also offers four reduced-portion meals on its menu.

These are examples of the impact Eat Well Otero, a grantee of the Paso Del Norte Health Foundation’s Healthy Eating, Active Living initiative, is having across Otero County, population 65,000.

In addition to working with Rachel’s Fine Dining and Hitch-N-Post BBQ, Eat Well Otero has two eateries that operate as part of the Gerald Champion Regional Medical Center (GCRMC) – Mountain View Cafe and The Bistro – that meet nutritional guidelines.

When Rachel’s Fine Dining launched its Eat Well Otero menu on April 30, it also hosted a sit-down dinner for the homeless in the Alamogordo area. The restaurant staff treated 80 less fortunate people to a nutritious three-course meal as a way to give back.

That type of commitment to the community and effort to provide a nutritional meal to the homeless is indicative of the outreach that is creating even greater awareness and support for the Eat Well Otero project.

Other marketing efforts include a Taste of Otero event that allows residents to sample healthy eating menu items, and a 16-page Eat Well Otero restaurant guide that highlights healthy recipes and other tips on healthy eating.

Eat Well Otero is in its second funding cycle from the Paso del Norte Health Foundation. In addition to its goal of recruiting five additional restaurants, it also has more education to do on how much food to put on your plate.

“We will expand our nutrition education program and increase restaurant staff training on portion control,” said Darnold of Eat Well Otero’s next steps. “Servers can introduce guests to the new concept so they know what to expect with the portions as far as size, nutrition, or value.”

Offering smaller portions, as Rachel’s Fine Dining and Hitch-N-Post BBQ are doing, is one of the more challenging aspects of the Eat Well Otero implementation. “When offering half portions, many customers expect ‘half-price’ on the meal,” said Darnold.

Despite the barriers, Eat Well Otero partners have increased offerings of reduced or half-portion meals, and are providing portion control information along with meal nutritional data for their menu items.

“Eat Well Otero is using a dual approach to get the Otero community to think about not just what they eat, but how much they eat,” said Darnold. “Simply offering healthy food and reduced portions at restaurants will not spark the kind of changes Eat Well Otero hopes to see. Public education is a must to meet Eat Well Otero’s desire to see improvements in our community’s dining choices.”

So far, so good for Eat Well Otero. 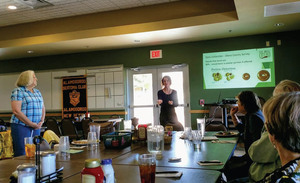